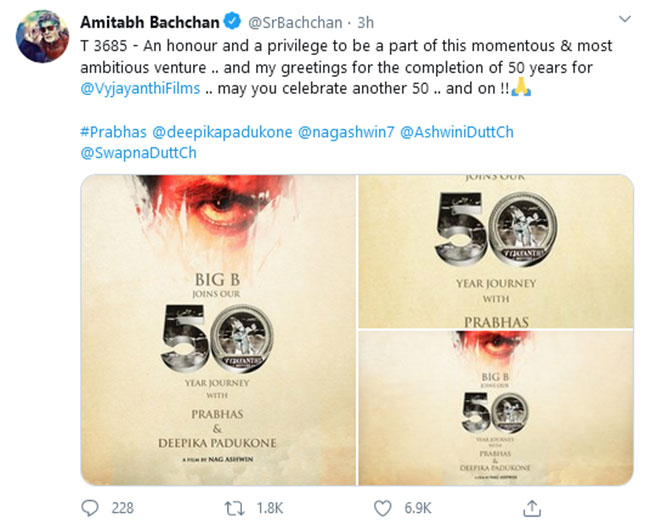 The team of Prabhas-Nag Ashwin film has revealed a huge update today. India’s biggest star Amitabh Bachchan will be a part of this film which is based on the time-traveling concept. ‘Vyjayanthi Films’ banner which is bankrolling this flick released a poster announcing that Big B joined their 50 years of journey along with Prabhas and Deepika Padukone.

Amitabh Bachchan took to Twitter and said, ‘ An honour and a privilege to be a part of this momentous & most ambitious venture.. and my greetings for the completion of 50 years for @VyjayanthiFilms.. may you celebrate another 59â€¦and on !!’

The hashtag, ‘#NamaskaramBigB’ is trending all over social media. It looks like Prabhas is the one most excited by Amitabh becoming a part of this project as he claimed that it is dream come true for him as he will be getting to share screen space with legendary Amitabh sir. The entire team is excited about it and Nag Ashwin is bringing India’s top stars into his project thereby escalating the hype massively. Hope he succeeds in delivering a wonderful film.