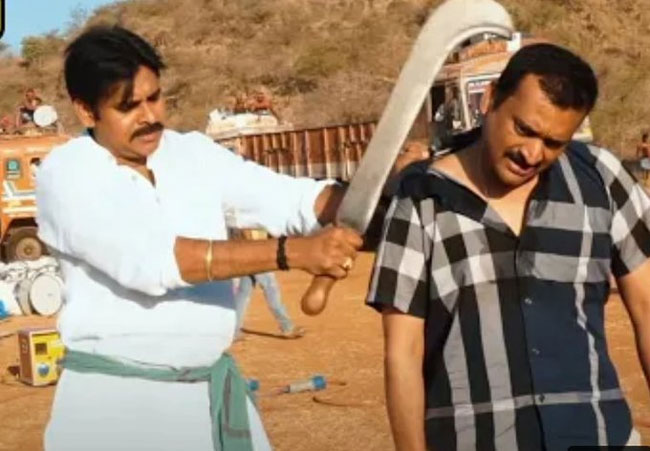 A self-proclaimed devotee of Powerstar Pawan Kalyan, Bandla Ganesh is always in the news one way or the other. The actor turned producer is known for his crazy speeches which often go overboard. He knows no bounds when it comes to praising Pawan Kalyan and check some of his speeches during Pawan’s events if you don’t believe us.

He produced ‘Teenmaar’ and ‘Gabbar Singh’ with Pawan Kalyan. While one was a failure, the other was a blockbuster. Since then, he is trying hard to make a film with Pawan for the third time but it is not working out. Though the star hero promised a film with Bandla Ganesh, the latter is unable to find a suitable director.

Recently, he turned up for online interaction with his fans on Twitter. He answered a lot of their questions and some of Pawan’s fans gave a strong warning to him. They posted a photo where Pawan Kalyan is seen holding a machete to Bandla Ganesh’s neck during the shooting of ‘Katamrayudu’.

They warned Bandla that it is what’s going to happen if he doesn’t deliver a successful film with Pawan. Taking it into notice, Bandla wrote, “OK”. Let us wait and see who is going to be the director for the Pawan-Bandla Ganesh project.