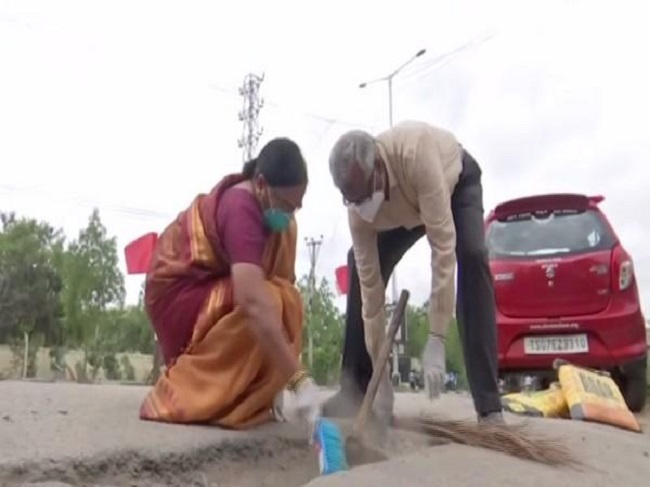 Potholes on the roads often cause a huge menace to the commuters and the walkers. On several occasions, commuters meet with accidents due to potholes and bad roads. Seeing this, an elderly couple had decided to fill the potholes and has been doing the same for the past 11 years in Hyderabad.

A 73-year-old man Gangadhar Tilak Katnam and his wife Venkateshwari Katnam, 64 years old have been filling the potholes for the past 11 years using their own money. Tilak Katnam is called Road Doctor by the locals.

Gangadhar Tilak Katnam said he was moved by the accidents caused by the potholes and wanted to do something. I had complained to the concerned officials about this, but there was no response from the officials. So I decided to do the work by myself and started to fill the potholes, he said.

Gangadhar Tilak Katnam, aka Road Doctor was a Railway employee and retired from his service. He joined a software company as a software design engineer after his retirement. But he left his job as he had dedicated to filling the potholes in the city.

He said, over the course of 11 years, the couple had managed to fill around 2,030 potholes across the city and spent around Rs 40 lakh for this. He has been using his pension money for his work. Bollywood Megastar Amitabh Bachchan has gifted a car to the couple knowing about their work.