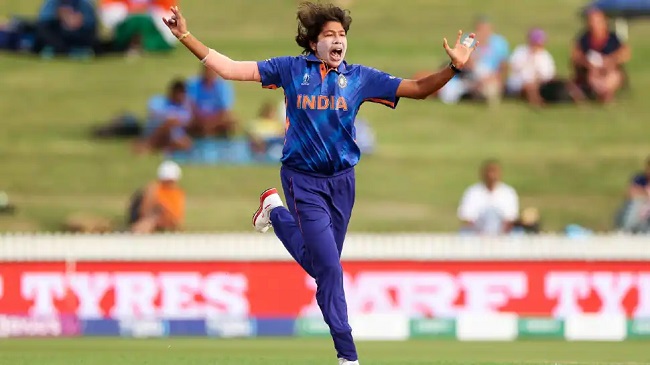 Ace Indian bowler Jhulan Goswami, who has been representing the team for over two decades had added one more feather in her illustrious cap. On Wednesday, the tall bowler reached a milestone, which is apparently a world record for women players.

Jhulan Goswami had emerged as the highest wicket-taking bowler in the 50 over format after she claimed the 250th wicket, the highest for any women player. By dismissing English player Tammy Beaumont, Jhulan Goswami achieved the same.

Jhulan Goswami went past the 250 mark in the ODIs during the match against England. Despite her herpes, India lost the match as the Indian team was outnumbered by the English team.

Jhulan Goswami had recently added one feather by becoming the highest wicket-taker in the ODI World Cup tournament with as many as 40 wickets in the Women’s World Cups. With this, she has surpassed the Australian bowler Lynn Fullston

The 250 wickets-mark set up by Jhulan Goswami is expected to remain intact for a few years given the fact that no active bowler is close to the speedster’s record. Being an integral part of the team since 2002, Julan had served as the skipper in the past. Currently, she is playing in her fifth World Cup tournament.